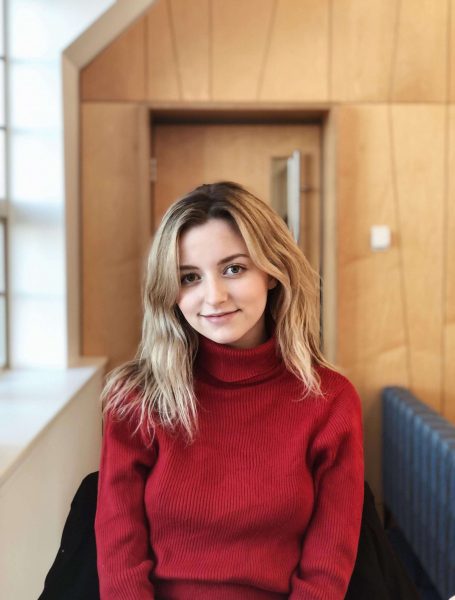 The Student Energy Leaders Fellowship is a 10-month online learning program designed to provide young people with the skills, knowledge and mentorship needed to become future leaders in the field of energy. Over the next couple of months, we’ll be sharing some of the projects that teams participating in the Leaders Fellowship have spearheaded to tackle energy issues in their communities. This is a conversation we had with a Canadian Leaders Fellowship team at the Northern Alberta Institute of Technology:

Kathleen, Rory, Maria and Jon are all students in NAIT’s Alternative Energy Technology program and members of their local Student Energy chapter. They are currently designing a roadmap to making the NAIT campus more sustainable.

What got you excited about energy efficiency?

Maria: It wasn’t until high school that I started looking at it [energy efficiency] as an actual career path. I saw a presentation from environmental engineers and that’s how I got exposed to the research and technology part of climate change. From taking courses in the Alternative Energy Technology program I’ve learned and realized that energy efficiency is the most attainable way to reduce our emissions. And it’s one of, I think, the easiest to implement.

Kathleen: They [the Alternative Energy Technology program] really drive it home that energy efficiency, or energy conservation, is probably the best solution to achieve a lot of our goals of being more sustainable.

Jon: I remember watching Al Gore’s An Inconvenient Truth and just being blown away by it. It was always there in the back of my mind throughout high school. I became an electrician and worked a lot in mines and resource extraction, oil refineries, pulp mills- things like that- and I saw the vast amount of energy that we used. It was when I was travelling in New Zealand that I had the chance to build a wind turbine for a friend that I met that I decided that this is what I really wanted to do.

HOW DID YOU DECIDE TO PURSUE THIS PROJECT TOGETHER THROUGH THE LEADERS FELLOWSHIP PROGRAM?

Maria: I asked the chair of our program for some ideas on what could be done for the project and he said that some administration staff had been reaching out to him asking if there was any space where teachers and students could collaborate and talk about the sustainability of NAIT. That’s kind of how I got the idea. I brought it up to the rest of the team and they wanted to do it!

Jon: I heard about the Fellowship through Maria and decided it would be a very cool thing to do to push my skills and knowledge.

Rory: Kathleen and Maria approached me, and they already had this idea kind of bubbling in their heads. I was looking for excuses at that point to…do some real world stuff that would push the boundaries in communication and interacting with other bodies as opposed to just learning technicalities and how [energy] systems work.

WHAT KIND OF IMPACT DO YOU THINK YOUR PROJECT WILL HAVE ON THE WAY PEOPLE ON THE NAIT CAMPUS AND IN THE COMMUNITY THINK AND ACT ON ENERGY CONSUMPTION?

Kathleen: Our project is mostly aimed towards the higher-ups within NAIT, to make change from the top-down. We’ve also been talking about how we can bring in the input of students…to show [NAIT] that there is genuine interest and necessity to do these things.

Jon: I think it will depend a lot on the willingness of the decision-makers at NAIT, and how they go forward as an institution as far as energy consumption and energy efficiency is concerned. There are some very visible and highly supportive things that we can do, that NAIT’s student association can do, like making better waste disposal categories and having water-saving taps in every bathroom. In terms of major improvements, I think it would have to come from the top at an institutional level.

SO, YOU’RE KIND OF HOLDING THE PLACE OF A LOBBYIST ON YOUR CAMPUS TO MAKE A CHANGE THROUGH THE INSTITUTIONAL LEVEL.

Kathleen: Not an easy task.

Rory: I’ve been pretty cynical at times of how the student body at NAIT perceives the [sustainability] issues we take to heart. There are people directly across the Alternative Energy Technology building at NAIT running massive boilers or training to be diesel engine technicians. There’s not a lot of impetus for change because the image NAIT has to keep up doesn’t depend on the values that we take to heart. That is, I think, the challenge in this. And that’s why we need to approach it from a top-down perspective.

Kathleen: Though I agree with Rory, I also disagree. I’ve talked to a lot of people at NAIT that just don’t know how to change it [NAIT] because they all have this idea- this image- of NAIT as being trades-oriented, which is typically more conservative in nature.

WHAT ARE YOUR LONG-TERM VISIONS FOR THE SUSTAINABILITY PLAN AT NAIT?

Jon: Our objective is to come up with a long-term vision, and some goals, for NAIT. There is the 2030 Goals Plan and they [NAIT] is also in the process of making a Vision 2050 Corporate Plan. So we could make suggestions to both of those timeframes. This could be something that could be picked up by our Student Energy chapter at NAIT, or the students association, or by faculty. Hopefully, it will be something that will continue on.

IN A BROADER SENSE, WHAT ROLE DO YOU SEE FOR YOUNG PEOPLE IN ACCELERATING THE SUSTAINABLE ENERGY TRANSITION IN AN EQUITABLE WAY?

Kathleen: They [young people] are so much more aware that they can make a big difference going into the job market because they are learning everything about it and making more connections from what all the possibilities are out there. There’s a lot out there that young people are seeking out, not just it [information] being offered and not taken advantage of. I think there’s tons of interest and lots of leaders being formed out of necessity.

Rory: I might have a perspective that’s pretty different. I’ve been thinking a lot about late stage capitalism…what’s always been on my mind is affordability. What will my lifestyle be, how can I afford a house or a car, how will I end up living? Myself and a lot of my peers will choose differently [from the past] in how we live our lives, in the space that we take up, and in whether we choose to bring or not to bring children into the world. I can see a lot of tiny houses, location efficient urban living, and use of public transit. That’s how I see, going forward, the younger generation making efforts to have a much more minimal impact than previous generations.

HOW HAS THE LEADERS FELLOWSHIP SUPPORTED YOUR GOAL OF ACHIEVING NET-ZERO EMISSIONS AT YOUR CAMPUS?

Kathleen: We get a lot of good information!

Jon:  We just had our first meeting with our mentor and the energy that he brought to us was really invigorating. The channels are always open between Marcus, the Leaders Fellowship Coordinator, and the rest of the team that is running the program. We haven’t drawn on many resources yet but we feel like they’re there when we need them.